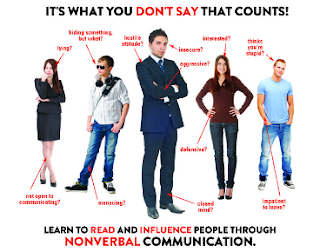 When I was teaching psychotherapy techniques to psychiatry residents and psychology interns, one piece of advice I gave them ran counter to the advice most frequently given by other supervisors. I told them, when doing therapy with patients with personality disorders, to pay more attention to the words that the patient/client verbalizes than to their non-verbal expressions and body language.

In general, body language is in fact usually more important than what a person says in determining how they really feel or what they really believe. This is true because, biologically, non-verbal communication evolved in our species long before language did, and became a more primal representation of what is going on inside of us.

So why do I give trainees the opposite advice? The fact that non-verbal behavior conveys more and more accurate information to another person than verbal behavior is precisely the point. People who have personality disorders are playing roles in their family. In a sense, they are acting! These people have developed a false self or persona that is one of the various roles I have described in prior posts – savior, avenger, go-between, spoiler, defective, loser, monster, covert caretaker, etc. In order to do this most effectively, one has to be a good actor, and therefore hide one’s true self – one’s actual beliefs and feelings which are not part of the act! Because role players have to be convincing, they are purposely giving off the wrong impression with their body language. How do they know to do that? Probably through trial and error.

Why do they become such good method actors? The simple explanation is that for them, playing the role as well as possible seems to be nearly a matter of life or death. Not playing the role leads to a form of existential terror called groundlessness. A person nonetheless does have the power to go ahead and exhibit their true selves in spite of this, but in dysfunctional families, doing so is terrifying. One of the things I learned in dealing with spoilers (borderline personality disorder) is that, whenever they feel that what they are doing is not working, that is when they start to self injure (cutting and burning themselves).

So what about their verbal behavior? Shouldn’t that also be misleading for the same reasons? Well yes it is. But there is a peculiarity of language that leads to my second piece of advice to beginning therapists: whenever patients say something that is a little ambiguous – when there is more than one way to interpret it – I tell them to at least think about the less obvious one. This is also the secret to solving the New York Times Sunday crossword puzzle, in which a lot of the clues can be interpreted in a bunch of different ways to throw solvers off.

For example, the mother of a nurse yelled at her, “I can’t believe you talk to doctors that way!” The nurse was far more outspoken than most people in her situation and often surprisingly got away with it. Of course, the nurse interpreted the mother’s remark as a criticism because of her tone of voice. But the words themselves contain no value judgment at all! I think the mother actually admired her daughter for being outspoken because she couldn’t be herself, but could not admit it.

I also think the nurse knew that because she was in fact acting out successfully in that regard, and the mother was vicariously living through her. The reason the nurse got upset when Mom yelled at her was because the mother was now seemingly upset with her for doing the very thing that the mother seemed to want her to do in the first place. The ambiguity in the words Mom chose can give clues as to what Mom's real feelings are.