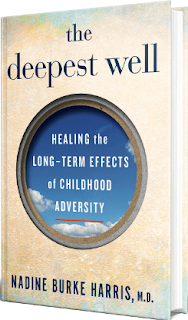 Every mental health professional should know that adverse childhood experiences (especially with parents who are abusive, neglectful, are perpetrators or victims of domestic violence, have multiple partners, or have substance abuse issues) are a major risk factor for developing almost every psychiatric disorder imaginable. Yet therapists and psychiatrists often ignore this issue in favor of theories about some sort of genetically-caused, pre-existing brain disorder.

In her amazing and surprisingly entertaining book, pediatrician Nadine Burke Harris (now surgeon general of California) outlines in vivid detail how ACE’s are toxic stressors that impact our bodies biologically and put us at higher risk for a variety of physical, not just psychological illnesses over the course of our entire lifetime. She points out that this does not only effect those who live poor neighborhoods, but can happen anywhere,

She covers the issue of epigenetics (how the environment turns genes off and on) as well as differentiating the effects of ongoing as opposed to time-limited stress. She zeroes in on the amygdala (the part of the brain that is responsible for fight or flight reactions) and how it can inhibit cognitive functioning, and on the sometimes toxic effect of stress hormones like cortisol.

In her observations as a crusader in the medical field, she came to realize that the reason physicians were often unaware of how this was taking place resulted from the fact that they never asked about it. As I have often said, it’s a case of don’t ask, don’t tell. Which is also the reason that psychodynamic and CBT therapists aren’t aware of the role of ongoing family interactions in their patients’ symptoms.

Also discussed in detail is how, in public discussions and meetings, parents can be resistant to various plans to confront ACE’s (due to what the author calls “hateration”) for fear that doctors would be stigmatizing their children as being brain damaged.  I think a bigger fear in the public is stigmatizing parents. As I often write about, you cannot call any type of parenting a problem these days anywhere without being attacked.

Last but not least, she talks about the intergenerational issues involved in chronic family stress. Here, the author seems to be on the right track, but I’m not clear if she, too, is unaware of the role of ongoing repetitive dysfunctional family interactions with their extended family members among both adults and children - particularly the role of grandparents in, unintentionally or intentionally, reinforcing problematic parenting practices and marital issues.

For example, she cites the case of a woman who put up with verbal abuse from her husband and who stayed because she blamed herself and told herself she had to put up with it for the sake of the kids. Were her parents alive? If so, did they know what was going on? What did they have to say about it? If they didn’t know, why hadn’t she told them? Was she afraid they’d tell her it was her fault and she needed to stick it out for the sake of the kids? It sounds like this might possibly have been a case of don’t ask, don’t tell.

The closest she comes to discussing extended family is when she gives an example of how the aunt of a child who was a patient of hers seem to undo a lot of the therapeutic work that she had done with the child and the child’s mother.

It is true that certain early fear tracks in the amygdala are formed during the interactions of mothers with their babies, as she correctly points out. It is also true that these tracks are highly resistant to the usual process of neural plasticity that might fix issues caused by trauma. Scientists often seem to assume that the tracts are permanently damaged. However, perhaps it is true that the tracts remain strong because they are constantly being triggered and reinforced by the attachment figures throughout life.

If indeed the author is not aware of all of the forces at play here, she is hardly alone. So even with this possible and understandable omission, I cannot recommend this book highly enough.
David M. Allen M.D. at 6:00 AM