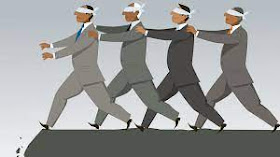 One thing that is a major theme in this blog is that many if not most therapists seem to think that most people’s problems are “all in their heads” and have nothing to do with the ongoing reinforcement of problematic behaviors through interaction with kin and ethnic group members. Groupthink is clearly one of the most powerful, if not the most powerful psychological force in everyday life.

To see this clearly, think about what is going on in the USA today that is a constant focus in the press, talk shows, podcasts, and other media venues: the polarization of political life. Just look at the almost cult-like behavior on both sides, from the QAnon conspiracy theories on the right to the habitually offended community of social justice warriors on the left. Free speech, supposedly a cornerstone of the United States ethos, is attacked relentlessly by both sides without any irony or sense of awareness of the inherent contradictory nature of some of their viewpoints.

Yet so many therapists just ignore groupthink. The only exception is those who believe in family systems therapy, which was big in the 80's and 90's but has since fallen out of favor, particularly with psychologists. The problem with many family systems therapists, however, is the opposite: they seemed to have lost the individual. Although many people do not do it, they  are perfectly capable of employing critical thinking and coming up with their own thoughts, and behaving according to their idiosyncratic desires, if they are brave enough to do so.

The current state of affairs would be amazing if it weren’t so sad.

When I first started looking for clues about what was really going on in the lives of my patients when they were free associating in the psychoanalytic sense (back then, most psychiatrists still did psychotherapy and were analysts), I began to focus in on such things as logical fallacies. I, like most people, just thought those were common, somewhat accidental errors of thinking. I would start to express confusion about what the patient was actually meaning to say, and eventually happened upon information patients had not before volunteered. This lead me to start asking questions that my psychoanalytic supervisors never taught me to ask, like “what does your mother think about this?” – and I meant in the present, not when the patient was a kid.

What I didn’t know then was that the use of logical fallacies is one of the hallmarks of groupthink, so when I questioned them I was really finding a way to get at what they really thought, not what they were supposed to think. As my colleague Gregg Henriques points out, logic evolved not to get to the truth, but to justify group norms.

The more I got into it, the more I realized there were a whole lot of other “markers” that told me when I was hearing family groupthink and not the patients’ true thoughts and feelings. The following is a list of them, and there may certainly be other ones:

·       Defense mechanisms (as listed by psychoanalysts)

·       Willful blindness (the refusal to even look at data which may challenge the group’s “wisdom”).

·       Plot holes (like when you are seeing  a movie and you get the feeling that such characters would never have said something like they did in the script, or that one of characters seems to know something they should have no way of knowing).

·       Ambiguous language (in which a sentence can mean two completely different or even opposite meanings, or a word has several different definitions and I couldn’t be certain which one the patient was using). This phenomenon is very familiar to people who work crossword puzzles.

·       Going off on tangents without returning to a main point or issue.

·       Spouting proverbs or maxims to justify behavior, such as “the grass is always greener…”  Often a marker for a family myth.

·       Mixed messages such as those exhibited by the infamous, so-called “help-rejecting complainer.”

It is interesting that when I bring up the ideas about group processes at professional meetings or in my books, no one actually disagrees or even argues with me. Instead, they just change the subject - or ignore the issue entirely.